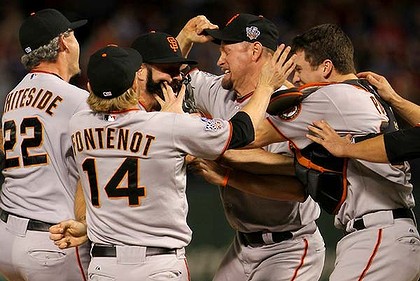 Here are a few quotes on how they won it.

“It goes to show you what a team can do when they play with heart & effort.” – Bruce Bochy, Manager, San Francisco Giants

But the best quote of the night, in my opinion came from the manager of the Texas Rangers, Ron Washington, when he said, “It’s not the best team that wins, its the team that plays the best. “

“The people who turn out best are those who make the best of the way things turn out.”

This quote is dedicated to the Canadian Men’s Olympic Hockey Team after losing 5-3 to USA. 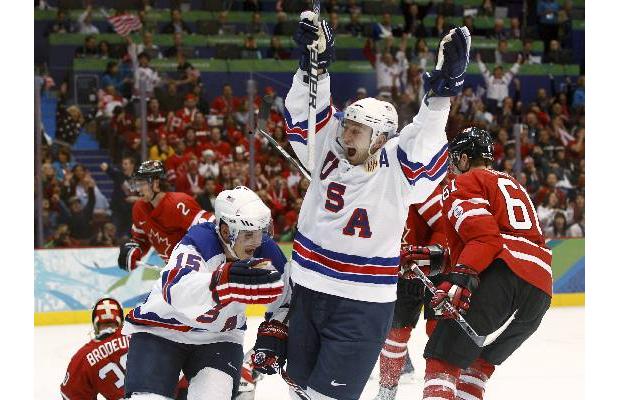 Canada faces up hill battle after losing to USA

“You may not be the champion of the day, but how you deal with adversity can still make you a winner.” – Richard Elmes, The Sales Dating Guy

“The willingness to be unselfish and play the game the right way… that is why we are champions.”  – Joe Girardi, Manager of the World Champion New York Yankees

He fell to his knees and looked heaven-ward as his teammates sprinted out to congratulate each other in a heap of baseball players that resembled little kids. And in some ways they were little kids.

Little kids that are blessed with the talent to play a game at such high levels that they receive millions of dollars for it.

Who am I talking about?

I am talking about the Philadelphia Phillies Baseball Club right after their ace closer Brad Lidge struck out the Tampa Bay Rays, Eric Henske for the final out to win their 2nd World Series, and first since 1983. http://msn.foxsports.com/mlb/gameTrax?gameId=281027122&refreshRate=30&MSNHPHMA

Both teams played their hearts out and in the locker room celebrations amonst all the traditions which includes lifting the trophy over their heads, putting on the special commemerative gear (T-shirt and Hat) and showering each other with champaigne their is another tradition that almost each and every player cherishes.

The tradition that I am talking about is having the opportunity to thank some of the people (whether it be parents or a little league coach) that helped them get to where they are today. And to be able to do it on National TV with millions of people watching makes the moment even sweeter.

Because nobody, not one player got to where they were today all by themselves. They all had teachers or coaches or friends and family that taught them the game, encouraged them to compete and celebrated their victories (and defeats) with them.

This is true in other endevours, not just sports. In business, mentors can help leaders move to the top of their profession. In families, parents and friends can mentor young boys to become men and young girls to grow up to be mature ladies.

And when you get to the top of your game, remember the tradition of champions and thank those who helped you get there.

Because it is easy for us to say we did it all on our own, but it takes a true champion to share the glory with those who helped them along the way.

Last night the Detroit Red Wings won the Stanley Cup for the 4th time in 11 years, as they defeated Sidney Crosby and the Pittsburgh Penguins 3-2 to win the Cup in 6 games (4-2).

After watching the television coverage of the celebration, 3 things stood out.

These 3 things are great examples of winning with class.

1. Shake hands: After battling so hard with the Penguins all series, both teams met at centre ice in order to shake hands and congratulate each other, not only on a hard fought series, but on having a successful season (Remember even Pittsburgh beat out 28 other teams to make it to the finals).

2. Celebrate: Taking the time to celebrate their victory is a critical part of what makes those moments sweet. Almost every kid who ever played hockey has dreamed of lifting up Lord Stanley’s Cup. And it would be a shame if they skipped that part of the dream, in order to chase their next dream. Unfortunately, people in business tend to do just that. They fail to take the time to celebrate their victories in order to persue their next goal.

Have you ever been guilty of doing this? If so, next time you make that big sale or wow them in your next presentation, stop and savour the victory. You will be glad you did. And it will help keep you motivated when you move on to that next goal.

3. Share the Glory: Almost every player who was interviewed took the time to thank those who helped them get there. Whether it was their parents who drove them to the rink, their minor hockey coach who taught them the skills or their wife, kids and friends for sticking with them during the journey.

Not one player got up and said that they did it all themself. The reason for this is simple. We need others to help us succeed and it is only appropriate to thank those who encouraged and supported them in their life and career.

And the same is true in our careers. So I encourage you to send a little note to someone who has helped you in your career. Not only will you feel good about sharing the glory, but it will make their day and allow them to feel like a winner as well.

So, congratulation to the Detroit Red Wings, 2007-2008 Stanley Cup Champions, you deserve it. And thanks for the great lessons on how to win with class.